“Welcome back to the TGS Patch Notes!

This month is a bit of a quieter one, as we move forward into quarter two. Although we are not hosting as many events this month due to outside bookings, we are moving our focus in the short-term towards our circuits! We’re introducing seasonal circuits, starting with the Spring Circuit, which will run from March to the end of April. To celebrate this, we are also including Rocket League into our list of circuit games! Make sure to check out the event pages for these events if you are interested in it.

Lastly, keep your eyes peeled for our featured events of the month, including our Intercollegiate Spring Social, Empowering Girls in Gaming, and the first ever Ting Open Series! Game on!”

As we move into March, we’re taking some time to gather information from the community as to what games they want to see. For the time being, we are running three weeklies and three circuits. Here is a breakdown of the March schedule:

* While we currently do not have any weeklies scheduled for Thursdays, we’re looking to experiment with new games during this time. Keep an eye out for updates on our Facebook page for news on upcoming games at TGS!

For more information about these weeklies, click on their hyperlinks to be redirected to their event pages. If you’re looking to meet the communities behind these games, join our Discord server!

Our monthly circuits have received a new look! This month, we are introducing seasonal circuits, starting with our Spring Circuits. For the next two months, we’ll be running circuits for Teamfight Tactics, Rocket League, and Fortnite! Click on the links below for more information about the circuits: 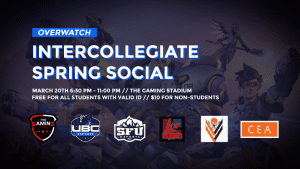 Wind down before finals pick up with UBCEA, SFUEA, LCVE, LEA, and CEA for an Intercollegiate Overwatch Spring Social on Friday, March 20th at The Gaming Stadium!

We’ll be hosting a Guess the SR Challenge, a 1v1 Mystery Hero Lock-Out Elimination Bracket, and high and low SR LAN Inhouses! The event is completely free for all students who bring valid student ID, so grab a friend and come enjoy a night of Overwatch😍 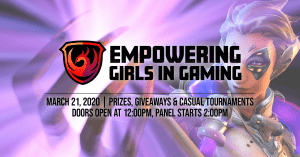 Back by popular demand, we’re HYPED to host our SECOND lady-centered event at TGS. Even though almost 50% of the gaming population are women, they are still very under-represented in esports. We’re looking to change that! 🤩

We host these events to encourage females in games and tech to come to the stadium, feel comfortable, and just have fun! The purpose of this is to empower and recognize female gamers in the local community in a safe, inclusive environment. 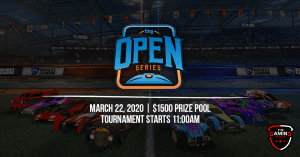 Still itching for more Rocket League goodness this month? 🚀 We’ve got you covered with the Ting Open Series presented by Ting and Axeltoss! Compete for a chance at the $1500 prize pool, meet Axeltoss, aim to be the last team standing at TGS, and watch some great Rocket League action with the community!

We at The Gaming Stadium are excited to share our space with Vancouver Street Battle, Canada’s premier gaming destination for console gaming! Their team has just celebrated their grand re-opening this last Saturday, and is looking forward to a fantastic second quarter! If you haven’t heard of this group already, check out their socials listed below. VSB is open every Wednesday, Friday, and Saturday for competitions. Check out their schedule and list of games here.