We’re excited to announce that The Gaming Stadium will be a show partner for Fan Expo Vancouver from February 15th to 17th, 2020!

What is Fan Expo Vancouver?

Fan Expo Vancouver is a three-day pop culture convention in Vancouver, British Columbia, hosted at the Vancouver Convention Centre. There will be hundreds of different vendors and exhibitions to explore, as well as a variety of different panels, workshops, and more!

The Expo will also have some of our favourite actors, cosplayers, and voice actors, such as: 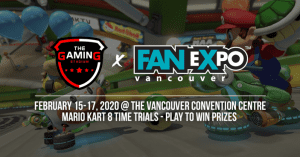 This year, The Gaming Stadium will be running Mario Kart 8 Deluxe time trial tournaments at our booth throughout the weekend! In addition, we will have PS4s set-up for casual free play of NHL 2020 as well!

Registration for the Mario Kart Deluxe tournament will be available on-site for free! The prizes for the top three finishers are:

The winners of the time trials will be announced and contacted on Sunday, February 16th, at 3:00PM. Winners do not need to be present to win the prize. Think you have what it takes to take home the grand prize? Make sure to stop by our booth and say hello!

If you haven’t already, make sure to buy your tickets for Fan Expo here! We look forward to seeing you there.