Just because the summer is coming to an end doesn’t mean that The Gaming Stadium is slowing down! We’re excited to share some of our biggest upcoming events, as well as some exciting new additions to our weekly roster.

Our partners at ggChampions have announced a $25,000 Teamfight Tactics tournament sponsored by HP Omen! If you enjoy competing in Teamfight Tactics, you can win some excellent prizes including Riot Points or an HP Omen Gaming setup. Every Tuesday throughout the month of September, players competing at The Gaming Stadium will be eligible for a shot at the prize pool! Interested in learning more about the event? Check out our blog post about the event, and learn more about how you can enter!

The Gaming Stadium is excited to announce the September Series featuring Fortnite with $3000 in total prizing. On top of our regular event prize pools we are giving players the chance at an additional $1000 in prizing by consistently coming in and competing in our Tuesday Fortnite Weeklies in September, along with our Fortnite Open on Saturday, Sept 28th. TGS has four Fortnite events during September that offer September leaderboard points based on player results. After 4 weeks of play, the top 10 players on the leaderboard will take home the September Series bonus prize pool.

We are excited to partner with the Vancouver Street Battle for their first ever Novice Pro Series! It will play out similarly to the Canadian Pro Series circuit, but will have a unique spin that will keep both the players and spectators on their toes. The most elite players since the start of Smash Novices conception will be playing for bragging rights, glory, and prizes provided by Vancouver Street Battle. Interested in showing off your skills against the best of the best? Check out The Best Novice Finale’s official event page for more information about the event.

We’re hyped to host our first League of Legends Open Series tournament! No sweat, you don’t need to be a Challenger to participate – everyone is encouraged to come out and play. With $1,000 in prizes available, this is going to be a League of Legends tournament you don’t want to miss! The entry fee is $100 per team, which covers the cost for five (5) roster players and an optional two (2) substitute players. Find out more on how you and your team can enter the rift by checking out our event page.

The Classic Tetris World Championships (CTWC) for the NES are held every year at the Portland Retro Gaming Expo. This year’s CTWC takes place on October 18-20th at the Oregon Convention Center and you can win your way to Portland through the CTWC: Vancouver tournament! The entry fee is $10 per person, and the tournament will consist of four rounds: a qualifying round, a top 8, semi-finals, and finals. The full details about the event as well as a link to the full rules set can be found here.

After the success that was our first Barcraft event, we are happy to bring the Starcraft community another social night with tournaments! We’ll be hosting two separate Starcraft 2 tournaments: a beginner-friendly event that is free to participate in with general admission, and a competitive bracket targeted towards more competitive players. The main competitive tournament will have an additional entry fee of $5 for a shot at the $150 prize pool! Check out more information about the format of the tournaments here.

The release of Throne of Eldraine is on the horizon, and with it comes the first Standard format rotation since the release of MTG Arena. Come join us for one last $1000 hurrah with your current Standard decks before you bid them farewell to the land of Historic! The entry fee is $25 per person for early-bird registration, and $30 for regular price. The tournament will be a standard constructed “Best of 3” swiss format with a single elimination for the Top 8 finishers. You can find out more about the event here.

We’re excited to host our first ladies-only event at TGS. We’re hosting this ladies night to encourage female gamers to come to the stadium, feel comfortable, and just have fun. The purpose of this is to empower and recognize female gamers in the local community in a safe, inclusive environment. This event is open to women and feminine-aligned people, as well as any individual who is in a gender minority in their field. This includes trans individuals, genderqueer, agender, intersex, two spirit, and non-binary folks. Find out more about this free event at our event page. 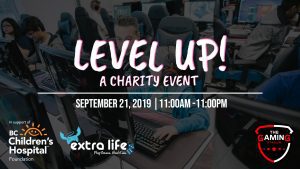 We’re hosting a charity event in partnership with Extra Life in support of the BC Children’s Hospital Foundation! Presenting Level Up; our first fundraising initiative where we invite gamers to ‘level up’ in order to provide kids across BC the best health care imaginable. Join us for a 12 hour day full of free play, silent auctions, raffle prizes, mini tournaments, special guests, and more! The entry fee is by donation (minimum $5), and all proceeds will go to support the charity campaign! Learn more about how to support the event here.

We are excited to introduce TGS Movie Nights, starting September 6th! It will be a double feature movie night, featuring Ready Player One at 6:00PM and Raiders of the Lost Ark at 9:00PM! For only $10, you can watch BOTH films and enjoy a free bag of popcorn and a soft drink! We’re excited to host weekly Movie Mondays in the weeks to come, so stayed tune for more movie showings!